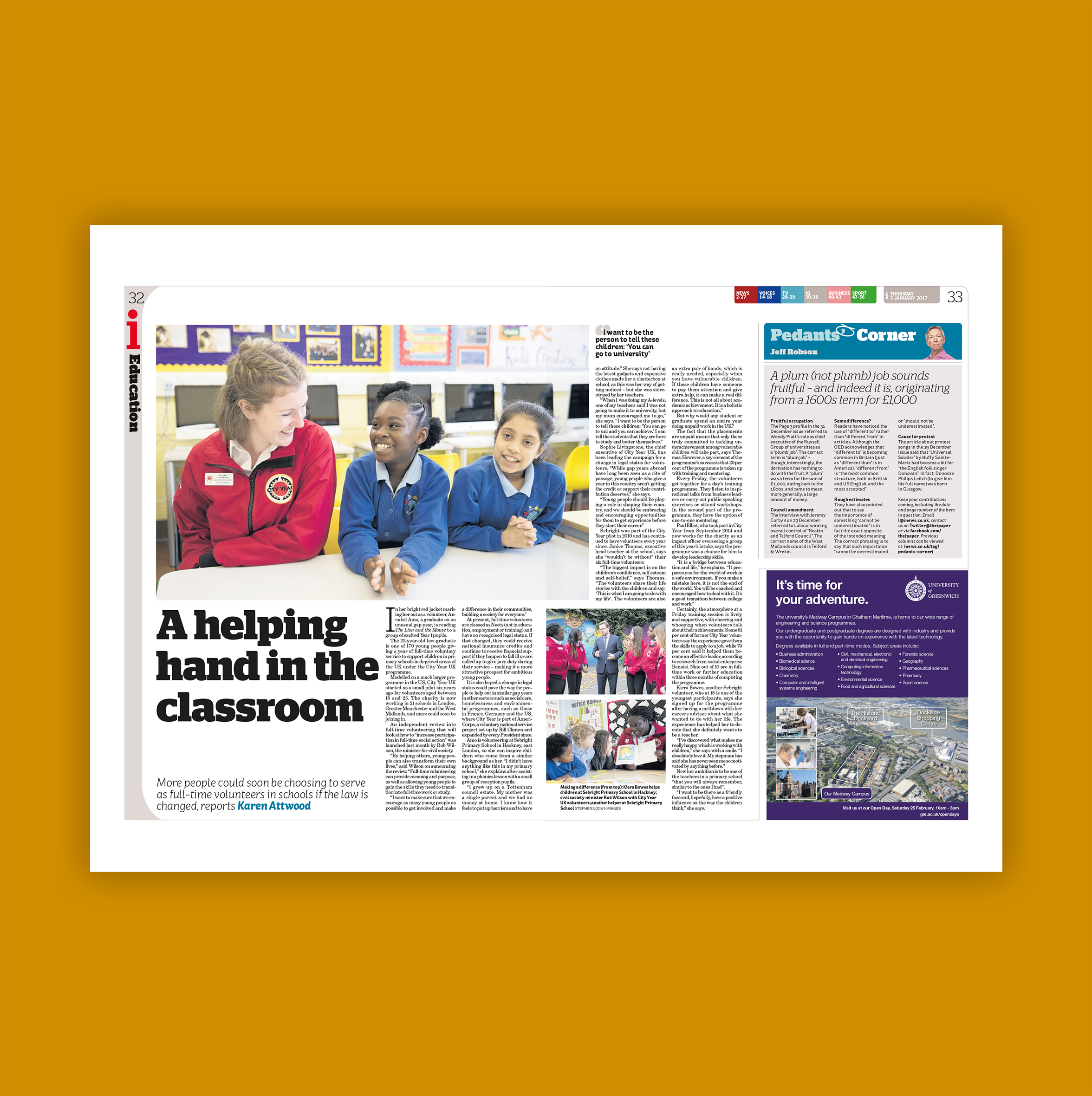 A helping hand in the classroom

A helping hand in the classroom

More people could soon be choosing to serve as full-time volunteers not just in classrooms but in social care and environmental schemes if the law is changed, reports Karen Attwood

In her bright red jacket marking her out as a volunteer, Annabel Amo, a graduate on an unusual gap year, is reading The Lion and the Mouse to a group of excited Year 1 pupils. The 22-year-old law graduate is one of 170 young people giving a year of full-time voluntary service to support children in primary schools in deprived areas of the UK under the City Year UK programme. Modelled on a much larger programme in the US, City Year UK started as a small pilot six years ago for volunteers aged between 18 and 25. The charity is now working in 21 schools in London, Greater Manchester and the West Midlands, and more could soon be joining in.

An independent review into full-time volunteering that will look at how to “increase participation in full-time social action” was launched last month by Rob Wilson, the minister for civil society. “By helping others, young people can also transform their own lives,” said Wilson on announcing the review. “Full-time volunteering can provide meaning and purpose, as well as allowing young people to gain the skills they need to transition into full-time work or study. “I want to make sure that we encourage as many young people as possible to get involved and make a difference in their communities, building a society for everyone.”

At present, full-time volunteers are classed as Neets (not in education, employment or training) and have no recognised legal status. If that changed, they could receive national insurance credits and continue to receive financial support if they happen to fall ill or are called up to give jury duty during their service – making it a more attractive prospect for ambitious young people. It is also hoped a change in legal status could pave the way for people to help out in similar gap years in other sectors such as social care, homelessness and environmental programmes, such as those in France, Germany and the US, where City Year is part of AmeriCorps, a voluntary national service project set up by Bill Clinton and expanded by every President since.

What motivates a full-time volunteer?

Amo is volunteering at Sebright Primary School in Hackney, east London, so she can inspire children who come from a similar background as her. “I didn’t have anything like this in my primary school,” she explains after assisting in a phonics lesson with a small group of reception pupils. “I grew up on a Tottenham council estate. My mother was a single parent and we had no money at home. I know how it feels to put up barriers and to have an attitude.” She says not having the latest gadgets and expensive clothes made her a chatterbox at school, as this was her way of getting noticed – but she was stereotyped by her teachers. “When I was doing my A-levels, one of my teachers said I was not going to make it to university, but my mum encouraged me to go,” she says. “I want to be the person to tell these children: ‘You can go to uni and you can achieve.’ I can tell the students that they are here to study and better themselves.”

Sophie Livingstone, the chief executive of City Year UK, has been leading the campaign for a change in legal status for volunteers. “While gap years abroad have long been seen as a rite of passage, young people who give a year in this country aren’t getting the credit or support their contribution deserves,” she says. “Young people should be playing a role in shaping their country, and we should be embracing and encouraging opportunities for them to get experience before they start their career.”

Sebright was part of the City Year pilot in 2010 and has continued to have volunteers every year since. Janice Thomas, executive head teacher at the school, says she “wouldn’t be without” their six full-time volunteers. “The biggest impact is on the children’s confidence, self esteem and self-belief,” says Thomas. “The volunteers share their life stories with the children and say: ‘This is what I am going to do with my life’. The volunteers are also an extra pair of hands, which is really needed, especially when you have vulnerable children. If these children have someone to pay them attention and give extra help, it can make a real difference. This is not all about academic achievement. It is a holistic approach to education.”

But why would any student or graduate spend an entire year doing unpaid work in the UK? The fact that the placements are unpaid means that only those truly committed to tackling underachievement among vulnerable children will take part, says Thomas. However, a key element of the programme’s success is that 20 per cent of the programme is taken up with training and mentoring. Every Friday, the volunteers get together for a day’s training programme. They listen to inspirational talks from business leaders or carry out public speaking exercises or attend workshops. In the second part of the programme, they have the option of one-to-one mentoring. Paul Elliot, who took part in City Year from September 2014 and now works for the charity as an impact officer overseeing a group of this year’s intake, says the programme was a chance for him to develop leadership skills. “It is a bridge between education and life,” he explains. “It prepares you for the world of work in a safe environment. If you make a mistake here, it is not the end of the world. You will be coached and encouraged how to deal with it. It’s a good transition between college and work.”

Inspiring in the classroom

Certainly, the atmosphere at a Friday training session is lively and supportive, with cheering and whooping when volunteers talk about their achievements. Some 81 per cent of former City Year volunteers say the experience gave them the skills to apply to a job, while 70 per cent said it helped them become an effective leader, according to research from social enterprise Renaisi. Nine out of 10 are in full-time work or further education within three months of completing the programme. Kiera Bowes, another Sebright volunteer, who at 18 is one of the youngest participants, says she signed up for the programme after having a meltdown with her careers adviser about what she wanted to do with her life.

The experience has helped her to decide that she definitely wants to be a teacher. “I’ve discovered what makes me really happy, which is working with children,” she says with a smile. “I absolutely love it. My stepmum has said she has never seen me so motivated by anything before.” Now her ambition is to be one of the teachers in a primary school “that you will always remember, similar to the ones I had”. “I want to be there as a friendly face and, hopefully, have a positive influence on the way the children think,” she says.