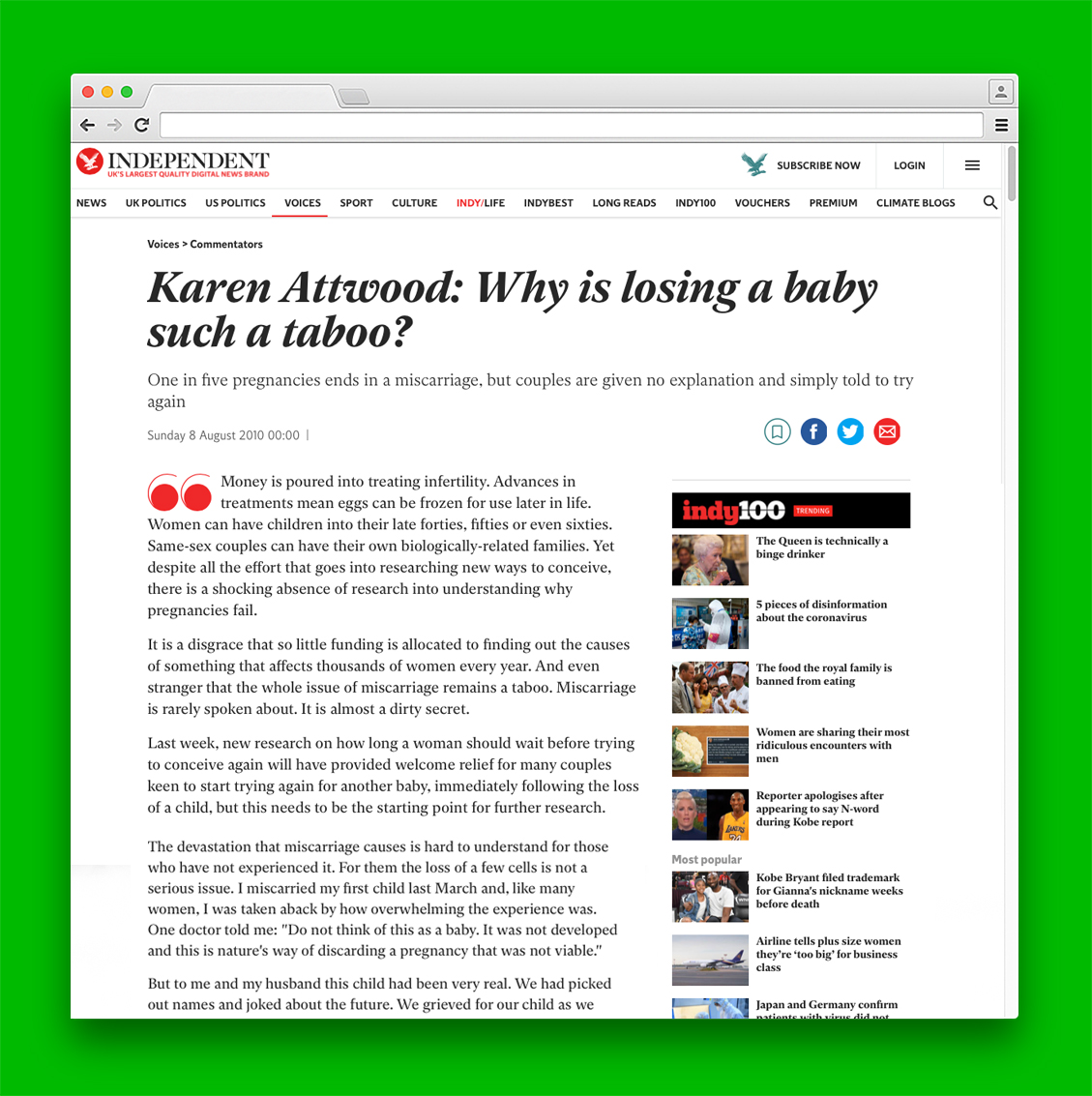 Karen Attwood: Why is losing a baby such a taboo?

Karen Attwood: Why is losing a baby such a taboo?

One in five pregnancies ends in a miscarriage, but couples are given no explanation and simply told to try again

“Money is poured into treating infertility. Advances in treatments mean eggs can be frozen for use later in life. Women can have children into their late forties, fifties or even sixties. Same-sex couples can have their own biologically-related families. Yet despite all the effort that goes into researching new ways to conceive, there is a shocking absence of research into understanding why pregnancies fail.

It is a disgrace that so little funding is allocated to finding out the causes of something that affects thousands of women every year. And even stranger that the whole issue of miscarriage remains a taboo. Miscarriage is rarely spoken about. It is almost a dirty secret.

Last week, new research on how long a woman should wait before trying to conceive again will have provided welcome relief for many couples keen to start trying again for another baby, immediately following the loss of a child, but this needs to be the starting point for further research.

The devastation that miscarriage causes is hard to understand for those who have not experienced it. For them the loss of a few cells is not a serious issue. I miscarried my first child last March and, like many women, I was taken aback by how overwhelming the experience was. One doctor told me: “Do not think of this as a baby. It was not developed and this is nature’s way of discarding a pregnancy that was not viable.”

But to me and my husband this child had been very real. We had picked out names and joked about the future. We grieved for our child as we would have if she or he had died after being born. I was not given any explanation as to why this had happened, nor offered any tests. “It is just one of those things,” I was told time and again, or: “It was not meant to be.”

We waited six months before trying again. This was partly to do with the emotional impact. I needed time to deal with my loss and to prepare myself for potentially coping with a second miscarriage, but it was also because of the medical advice available at the time. We wanted to give our second child as great a chance as possible of surviving.

When I was blessed by becoming pregnant during the first month of trying again, I did not feel any joy in seeing the little blue line on the indicator stick. Instead I lived in terror until I was through to my 20-week scan and my baby – now my precious five-week old daughter – was given the all clear. Knowing why I had miscarried would have helped me cope with my loss and better prepared me for this pregnancy.

A staggering one in five pregnancies ends in miscarriage, with huge emotional cost to those involved. This figure is even higher – around one in three – when early miscarriages, those that occur before a woman misses her period, are included.

Nobody in the first burst of joy of pregnancy expects it to happen to them – these are statistics that are unlikely to sink in until you miscarry. This means it comes as a total shock when it does happen.

The fact that it is so shrouded in mystery and rarely openly discussed can leave many women blaming themselves and questioning whether their behaviour led to a miscarriage. It is only when you or someone close to you miscarries that you suddenly hear about all the other people you know that have also been affected.

Medical experts say that because most women who miscarry go on to have a healthy pregnancy, tests are not offered to find out the reasons for the failed pregnancy. The costs to the NHS of offering tests to every woman who miscarried would surely be high – but what would be the saving if clear causes were identified which could lead to preventative measures? Many miscarriages require a surgical procedure afterwards, an ERPC (evacuation of retained products of conception), and a hospital stay.

The most widely given explanation for miscarriage is that around 60 to 70 per cent are due to chromosomal abnormalities, which means the foetus does not develop in a healthy way. There are also certain risk factors associated with it. These include smoking, drinking alcohol, drugs, age of the mother and stress that are thought to contribute but again it is not clear to what extent. It is only when a woman suffers recurrent miscarriage, classed as more than three, that investigations will be carried out on the couple as to possible underlying causes.

Not knowing why miscarriage happens means there is little that women can do to prevent it in subsequent pregnancies. There is a lack of control. Last week’s study by the University of Aberdeen of 30,000 women has found that rather than waiting it is better to conceive within six months of a miscarriage for the best chance for a healthy pregnancy. This contradicts international guidelines. Until now women have been routinely told to wait several months in order to have a healthy pregnancy next time.

The NHS recommends waiting for three months in order for the menstrual cycle to reestablish itself, and to be emotionally prepared, whereas the World Health Organisation advises women to delay by six months. Yet it is not clear from the most recent study why waiting longer than six months may be associated with more risk. More research needs to be done.

Other researchers have suggested that by being pregnant a woman may enhance the function of the reproductive system, and it is also thought that those who have been recently pregnant may be leading a healthier lifestyle. This welcome piece of research should be a starting point for further study into the causes of miscarriage. It is also time to bring this taboo subject out into the open.