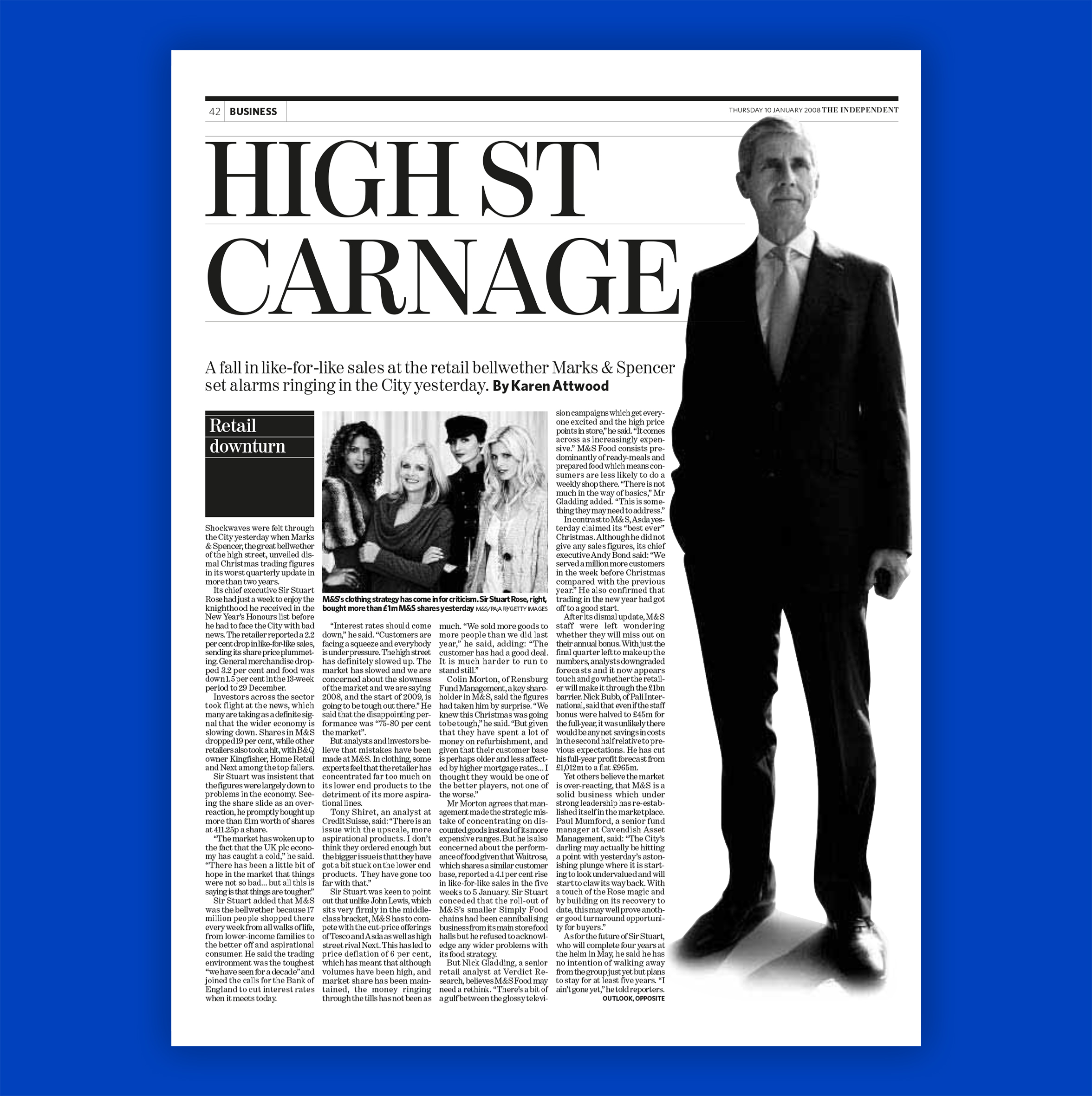 A fall in like-for-like sales at the retail bellwether Marks & Spencer set alarms ringing in the City yesterday. By Karen Attwood

Shockwaves were felt through the City yesterday when Marks & Spencer, the great bellwether of the high street, unveiled dismal Christmas trading figures in its worst quarterly update in more than two years.

Its chief executive Sir Stuart Rose had just a week to enjoy the knighthood he received in the New Year’s Honours list before he had to face the City with bad news. The retailer reported a 2.2 per cent drop in like-for-like sales, sending its share price plummeting. General merchandise drop-ped 3.2 per cent and food was down 1.5 per cent in the 13-week period to 29 December.

Investors across the sector took flight at the news, which many are taking as a definite signal that the wider economy is slowing down. Shares in M&S dropped 19 per cent, while other retailers also took a hit, with B&Q owner Kingfisher, Home Retail and Next among the top fallers.

Sir Stuart was insistent that the figures were largely down to problems in the economy. Seeing the share slide as an over-reaction, he promptly bought up more than £1m worth of shares at 411.25p a share.

“The market has woken up to the fact that the UK plc economy has caught a cold,” he said. “There has been a little bit of hope in the market that things were not so bad… but all this is saying is that things are tougher.”

Sir Stuart added that M&S was the bellwether because 17 million people shopped there every week from all walks of life, from lower-income families to the better off and aspirational consumer. He said the trading environment was the toughest “we have seen for a decade” and joined the calls for the Bank of England to cut interest rates when it meets today.

“Interest rates should come down,” he said. “Customers are facing a squeeze and everybody is under pressure. The high street has definitely slowed up. The market has slowed and we are concerned about the slowness of the market and we are saying 2008, and the start of 2009, is going to be tough out there.” He said that the disappointing performance was “75-80 per cent the market”.

But analysts and investors believe that mistakes have been made at M&S. In clothing, some experts feel that the retailer has concentrated far too much on its lower end products to the detriment of its more aspirational lines.

Tony Shiret, an analyst at Credit Suisse, said: “There is an issue with the upscale, more aspirational products. I don’t think they ordered enough but the bigger issue is that they have got a bit stuck on the lower end products. They have gone too far with that.”

Sir Stuart was keen to point out that unlike John Lewis, which sits very firmly in the middle-class bracket, M&S has to compete with the cut-price offerings of Tesco and Asda as well as high street rival Next. This has led to price deflation of 6 per cent, which has meant that although volumes have been high, and market share has been maintained, the money ringing through the tills has not been as much. “We sold more goods to more people than we did last year,” he said, adding: “The customer has had a good deal. It is much harder to run to stand still.”

Colin Morton, of Rensburg Fund Management, a key shareholder in M&S, said the figures had taken him by surprise. “We knew this Christmas was going to be tough,” he said. “But given that they have spent a lot of money on refurbishment, and given that their customer base is perhaps older and less affected by higher mortgage rates… I thought they would be one of the better players, not one of the worse.”

Mr Morton agrees that management made the strategic mistake of concentrating on discounted goods instead of its more expensive ranges. But he is also concerned about the performance of food given that Waitrose, which shares a similar customer base, reported a 4.1 per cent rise in like-for-like sales in the five weeks to 5 January. Sir Stuart conceded that the roll-out of M&S’s smaller Simply Food chains had been cannibalising business from its main store food halls but he refused to acknowledge any wider problems with its food strategy.

But Nick Gladding, a senior retail analyst at Verdict Research, believes M&S Food may need a rethink. “There’s a bit of a gulf between the glossy television campaigns which get everyone excited and the high price points in store,” he said. “It comes across as increasingly expensive.” M&S Food consists predominantly of ready-meals and prepared food which means consumers are less likely to do a weekly shop there. “There is not much in the way of basics,” Mr Gladding added. “This is something they may need to address.”

In contrast to M&S, Asda yesterday claimed its “best ever” Christmas. Although he did not give any sales figures, its chief executive Andy Bond said: “We served a million more customers in the week before Christmas compared with the previous year.” He also confirmed that trading in the new year had got off to a good start.

After its dismal update, M&S staff were left wondering whether they will miss out on their annual bonus. With just the final quarter left to make up the numbers, analysts downgraded forecasts and it now appears touch and go whether the retailer will make it through the £1bn barrier. Nick Bubb, of Pali International, said that even if the staff bonus were halved to £45m for the full-year, it was unlikely there would be any net savings in costs in the second half relative to previous expectations. He has cut his full-year profit forecast from £1,012m to a flat £965m.

Yet others believe the market is over-reacting, that M&S is a solid business which under strong leadership has re-established itself in the marketplace. Paul Mumford, a senior fund manager at Cavendish Asset Management, said: “The City’s darling may actually be hitting a point with yesterday’s astonishing plunge where it is starting to look undervalued and will start to claw its way back. With a touch of the Rose magic and by building on its recovery to date, this may well prove another good turnaround opportunity for buyers.”

As for the future of Sir Stuart, who will complete four years at the helm in May, he said he has no intention of walking away from the group just yet but plans to stay for at least five years. “I ain’t gone yet,” he told reporters.