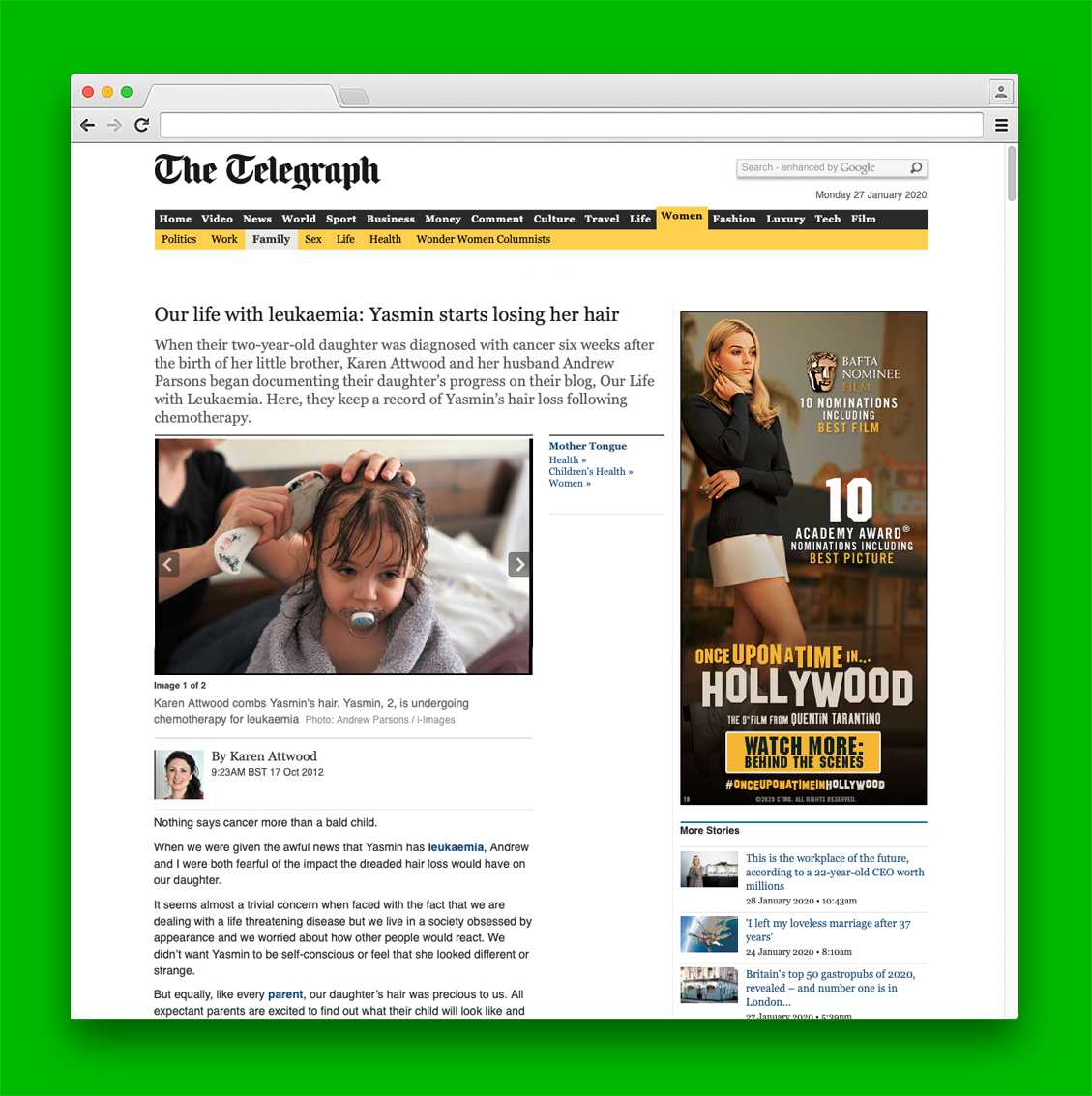 Our life with leukaemia: Yasmin starts losing her hair

Our life with leukaemia: Yasmin starts losing her hair

When their two-year-old daughter was diagnosed with cancer six weeks after the birth of her little brother, Karen Attwood and her husband Andrew Parsons began documenting their daughter’s progress on their blog, Our Life with Leukaemia. Here, they keep a record of Yasmin’s hair loss following chemotherapy.

Nothing says cancer more than a bald child.

When we were given the awful news that Yasmin has leukaemia, Andrew and I were both fearful of the impact the dreaded hair loss would have on our daughter.

It seems almost a trivial concern when faced with the fact that we are dealing with a life threatening disease but we live in a society obsessed by appearance and we worried about how other people would react. We didn’t want Yasmin to be self-conscious or feel that she looked different or strange.

But equally, like every parent, our daughter’s hair was precious to us. All expectant parents are excited to find out what their child will look like and what colour their hair will be. Would it be curly or straight?

Yasmin was one of those adorable babies born with a full head of hair. It was not the baby fluff that often comes away in a few weeks but real hair which grew into adorable curls. Although facially Yasmin is a mini version of her father, she was unmistakably my daughter due to our matching brown curls.

As her fringe grew over her eyes I refused to cut it and instead clipped it back off her face. She eventually had two curls at the front that were excessively longer than the rest of her hair. How I loved those curls. When I finally, grudgingly, took her for her first haircut, I carefully saved them in an envelope.

During her illness and before diagnosis, when she was in agonising pain and having night sweats, I took Yasmin to get a short fringe cut in so that her hair would be out of her eyes while in hospital.

At Great Ormond Street, Andrew and I were told that all children react differently to chemotherapy. Some lose their hair almost immediately but for others, it can take months, and even then it might not all fall out.

We hoped that Yasmin would keep her hair as long as possible. We still hadn’t got our heads around the fact that she had leukaemia.

But she started to lose hair within a fortnight of her treatment beginning. The first signs were a few hairs on her pillowcase but gradually her hair began to get matted with the hairs that were coming out getting caught into her sweaty ponytail.

When well, Yasmin had loved splashing around at bathtime but with the onset of her illness she began to hate it and loathed having her hair washed. We had avoided this trauma, with everything else going on, as long as possible, but eventually we could put it off no longer.

On September 17, we got Yasmin into the bath. As I started to wash her hair, it came out in clumps in my hand. This meant I had to perform an emergency haircut. Although I was horrified, I kept my voice cheerful for Yasmin and started singing ‘Thorougly Modern Millie’ as I bobbed her hair.

She looked really cute. Andrew and I were relieved. But overnight it matted at the back again. The second emergency haircut left Yasmin looking like a scarecrow.

On our next trip out to hospital, I called at three hairdressers on the way to the station hoping that somebody could salvage it. In each one I explained my daughter had leukaemia and what had happened. Each time I had to fight hard so as not to start crying. But they were all busy.

I finally found one who was able to cut Yasmin’s remaining hair into a short boyish cut. From the front she looked positively gamine. But with a big bald patch at the back.

I think Andrew was even more distressed than me by our daughter’s hair falling out.

As for Yasmin, she couldn’t care less.

Karen Attwood is a freelance journalist living in East London with her husband, photographer Andrew Parsons, and their children Yasmin, 2 and Isaac, three months. Karen and Andrew have started a blog documenting their lives following Yasmin’s leukaemia diagnosis to raise money for Great Ormond Street Hospital where she is being treated. You can follow their progress at www.ourlifewithleukaemia.blogspot.co.uk