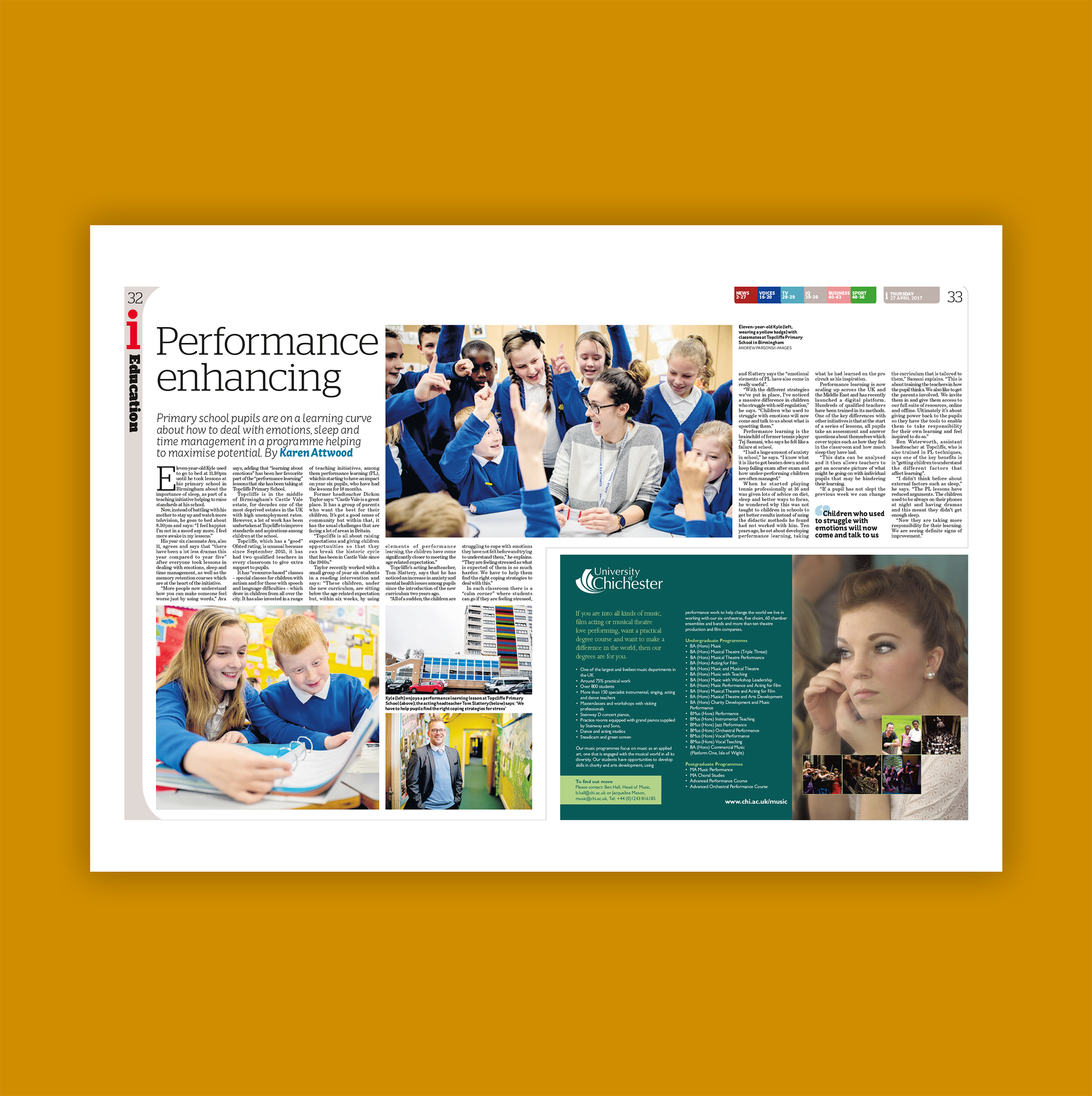 Primary school pupils in a deprived part of Birmingham are on a learning curve about how to deal with emotions, sleep and time management in a programme helping to maximise potential. By Karen Attwood

Eleven-year-old Kyle used to go to bed at 11.30pm until he took lessons at his primary school in Birmingham about the importance of sleep, as part of a teaching initiative helping to raise standards at his school. Now, instead of battling with his mother to stay up and watch more television, he goes to bed about 8.30pm and says: “I feel happier. I’m not in a mood any more. I feel more awake in my lessons.” His year six classmate Ava, also 11, agrees and says that “there have been a lot less dramas this year compared to year five” after everyone took lessons in dealing with emotions, sleep and time management, as well as the memory retention courses which are at the heart of the initiative.

“More people now understand how you can make someone feel worse just by using words,” Ava says, adding that “learning about emotions” has been her favourite part of the “performance learning” lessons that she has been taking at Topcliffe Primary School. Topcliffe is in the middle of Birmingham’s Castle Vale estate, for decades one of the most deprived estates in the UK with high unemployment rates. However, a lot of work has been undertaken at Topcliffe to improve standards and aspirations among children at the school.

Topcliffe, which has a “good” Ofsted rating, is unusual because since September 2015 it has had two qualified teachers in every classroom to give extra support to pupils. It has “resource-based” classes – special classes for children with autism and for those with speech and language difficulties – which draw in children from all over the city. It has also invested in a range of teaching initiatives, among them performance learning (PL), which is starting to have an impact on year six pupils, who have had the lessons for 18 months. Former headteacher Dickon Taylor says: “Castle Vale is a great place. It has a group of parents who want the best for their children. It’s got a good sense of community but within that, it has the usual challenges that are facing a lot of areas in Britain.

“Topcliffe is all about raising expectations and giving children opportunities so that they can break the historic cycle that has been in Castle Vale since the 1960s.” Taylor recently worked with a small group of year six students in a reading intervention and says: “These children, under the new curriculum, are sitting below the age related expectation but, within six weeks, by using elements of performance learning, the children have come significantly closer to meeting the age-related expectation.”

Topcliffe’s acting headteacher, Tom Slattery, says that he has noticed an increase in anxiety and mental health issues among pupils since the introduction of the new curriculum two years ago. “All of a sudden, the children are struggling to cope with emotions they have not felt before and trying to understand them,” he explains. “They are feeling stressed as what is expected of them is so much harder. We have to help them find the right coping strategies to deal with this.”

In each classroom there is a “calm corner” where students can go if they are feeling stressed, and Slattery says the “emotional elements of PL have also come in really useful”. “With the different strategies we’ve put in place, I’ve noticed a massive difference in children who struggle with self-regulation,” he says. “Children who used to struggle with emotions will now come and talk to us about what is upsetting them.”

Performing to their best

Performing to their best Performance learning is the brainchild of former tennis player Tej Samani, who says he felt like a failure at school. “I had a huge amount of anxiety in school,” he says. “I know what it is like to get beaten down and to keep failing exam after exam and how under-performing children are often managed.” When he started playing tennis professionally at 16 and was given lots of advice on diet, sleep and better ways to focus, he wondered why this was not taught to children in schools to get better results instead of using the didactic methods he found had not worked with him. Ten years ago, he set about developing performance learning, taking what he had learned on the pro circuit as his inspiration. Performance learning is now scaling up across the UK and the Middle East and has recently launched a digital platform. Hundreds of qualified teachers have been trained in its methods.

One of the key differences with other initiatives is that at the start of a series of lessons, all pupils take an assessment and answer questions about themselves which cover topics such as how they feel in the classroom and how much sleep they have had. “This data can be analysed and it then allows teachers to get an accurate picture of what might be going on with individual pupils that may be hindering their learning. “If a pupil has not slept the previous week we can change the curriculum that is tailored to them,” Samani explains. “This is about training the teachers in how the pupil thinks.

We also like to get the parents involved. We invite them in and give them access to our full suite of resources, online and offline. Ultimately it’s about giving power back to the pupils so they have the tools to enable them to take responsibility for their own learning and feel inspired to do so.” Ben Waterworth, assistant headteacher at Topcliffe, who is also trained in PL techniques, says one of the key benefits is in “getting children to understand the different factors that affect learning”. “I didn’t think before about external factors such as sleep,” he says. “The PL lessons have reduced arguments. The children used to be always on their phones at night and having dramas and this meant they didn’t get enough sleep. “Now they are taking more responsibility for their learning. We are seeing definite signs of improvement.”