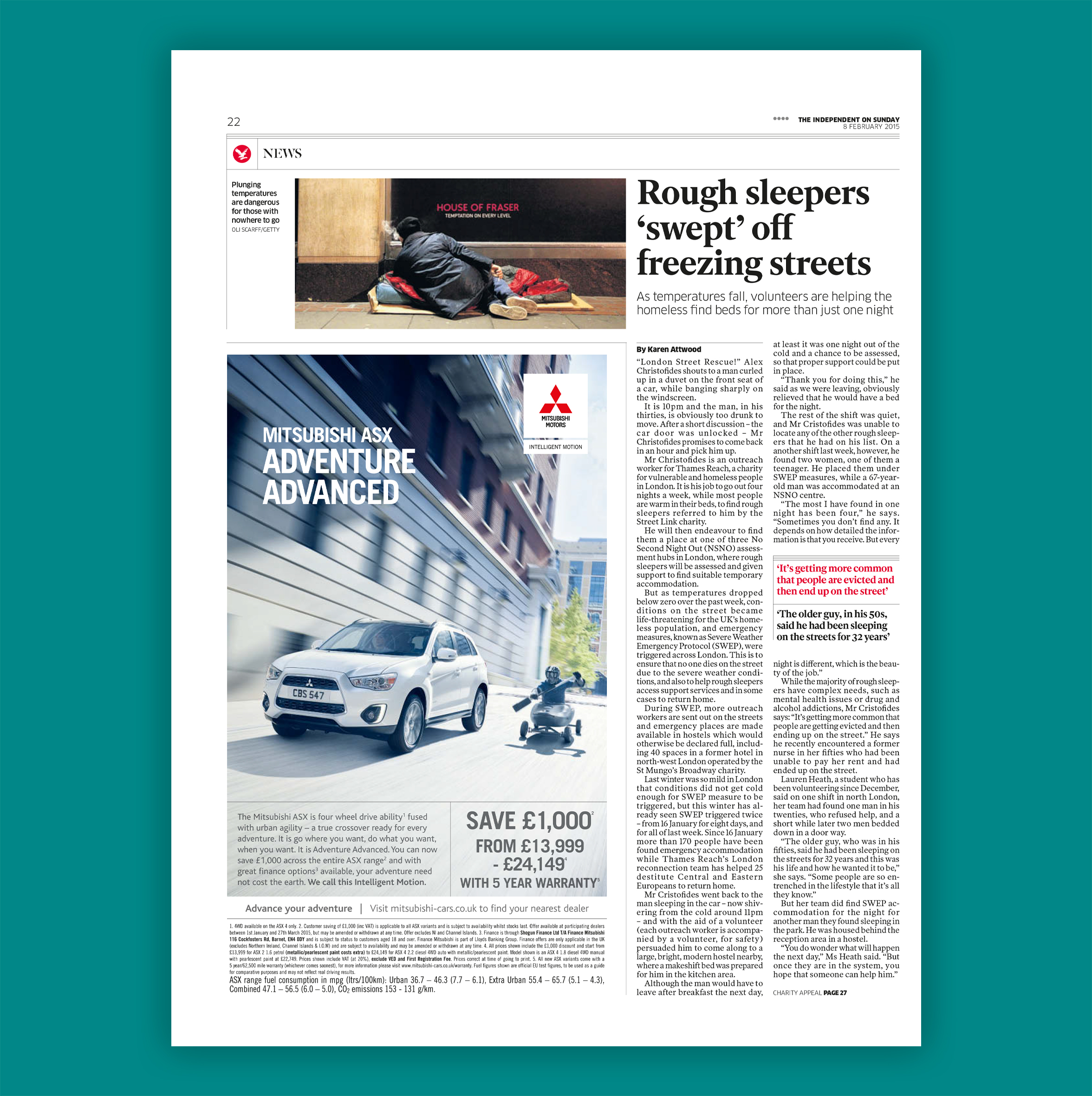 “London Street Rescue!” Alex Christofides shouts to a man curled up in a duvet on the front seat of a car, while banging sharply on the windscreen.

It is 10pm and the man, in his thirties, is obviously too drunk to move. After a short discussion – the car door was unlocked – Mr Christofides promises to come back in an hour and pick him up.

Mr Christofides is an outreach worker for Thames Reach, a charity for vulnerable and homeless people in London. It is his job to go out four nights a week, while most people are warm in their beds, to find rough sleepers referred to him by the Street Link charity.

He will then endeavour to find them a place at one of three No Second Night Out (NSNO) assessment hubs in London, where rough sleepers will be assessed and given support to find suitable temporary accommodation.

But as temperatures dropped below zero over the past week, conditions on the street became life-threatening for the UK’s homeless population, and emergency measures, known as Severe Weather Emergency Protocol (SWEP), were triggered across London. This is to ensure that no one dies on the street due to the severe weather conditions, and also to help rough sleepers access support services and in some cases to return home.

During SWEP, more outreach workers are sent out on the streets and emergency places are made available in hostels which would otherwise be declared full, including 40 spaces in a former hotel in north-west London operated by the St Mungo’s Broadway charity.

Last winter was so mild in London that conditions did not get cold enough for SWEP measure to be triggered, but this winter has already seen SWEP triggered twice – from 16 January for eight days, and for all of last week. Since 16 January more than 170 people have been found emergency accommodation while Thames Reach’s London reconnection team has helped 25 destitute Central and Eastern Europeans to return home.

Mr Cristofides went back to the man sleeping in the car – now shivering from the cold around 11pm – and with the aid of a volunteer (each outreach worker is accompanied by a volunteer, for safety) persuaded him to come along to a large, bright, modern hostel nearby, where a makeshift bed was prepared for him in the kitchen area.

Although the man would have to leave after breakfast the next day, at least it was one night out of the cold and a chance to be assessed, so that proper support could be put in place.

“Thank you for doing this,” he said as we were leaving, obviously relieved that he would have a bed for the night.

The rest of the shift was quiet, and Mr Cristofides was unable to locate any of the other rough sleepers that he had on his list. On a another shift last week, however, he found two women, one of them a teenager. He placed them under SWEP measures, while a 67-year-old man was accommodated at an NSNO centre.

“The most I have found in one night has been four,” he says. “Sometimes you don’t find any. It depends on how detailed the information is that you receive. But every night is different, which is the beauty of the job.”

While the majority of rough sleepers have complex needs, such as mental health issues or drug and alcohol addictions, Mr Cristofides says: “It’s getting more common that people are getting evicted and then ending up on the street.” He says he recently encountered a former nurse in her fifties who had been unable to pay her rent and had ended up on the street.

Lauren Heath, a student who has been volunteering since December, said on one shift in north London, her team had found one man in his twenties, who refused help, and a short while later two men bedded down in a door way.

“The older guy, who was in his fifties, said he had been sleeping on the streets for 32 years and this was his life and how he wanted it to be,” she says. “Some people are so entrenched in the lifestyle that it’s all they know.”

But her team did find SWEP accommodation for the night for another man they found sleeping in the park. He was housed behind the reception area in a hostel.

“You do wonder what will happen the next day,” Ms Heath said. “But once they are in the system, you hope that someone can help him.”