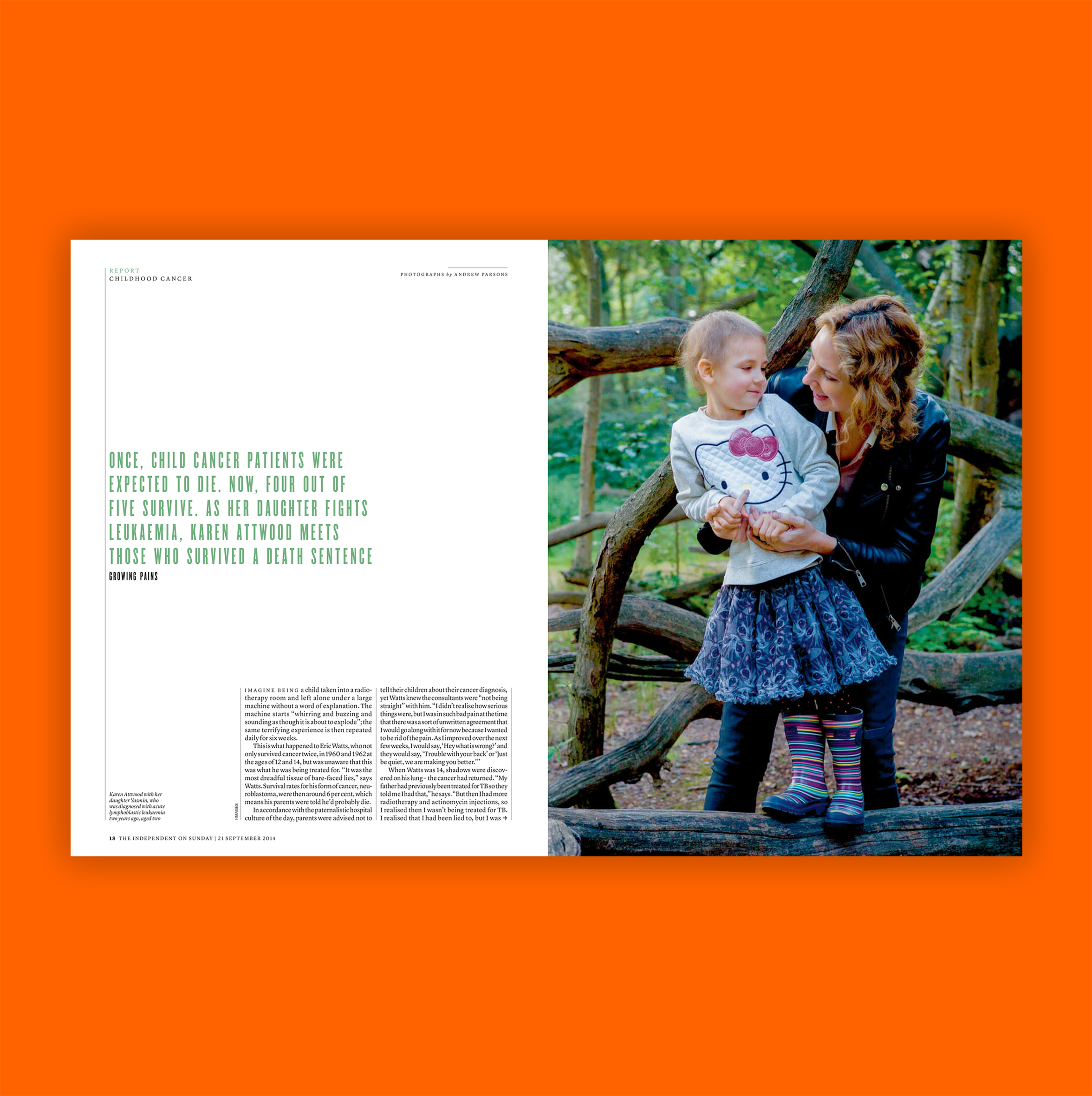 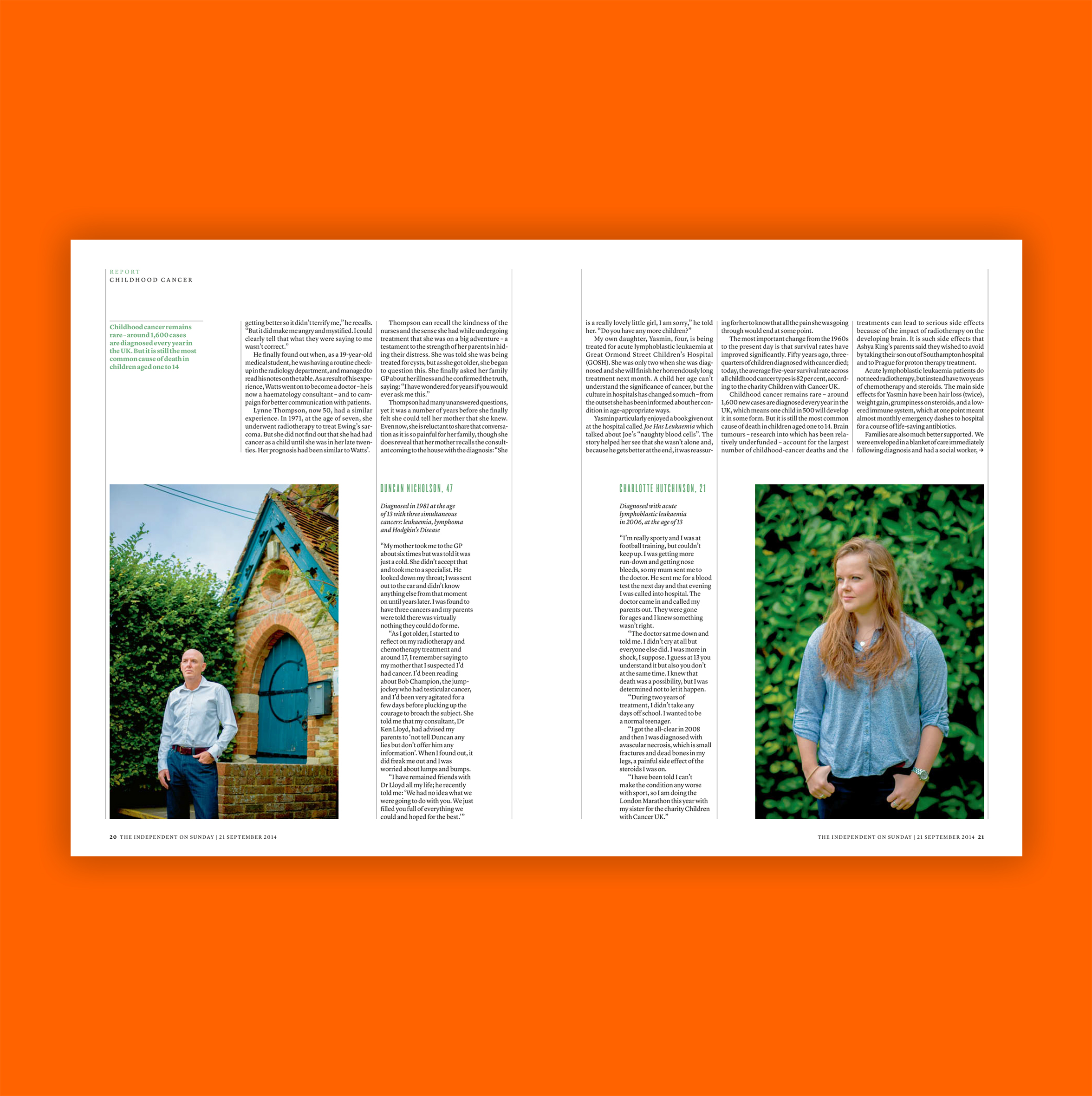 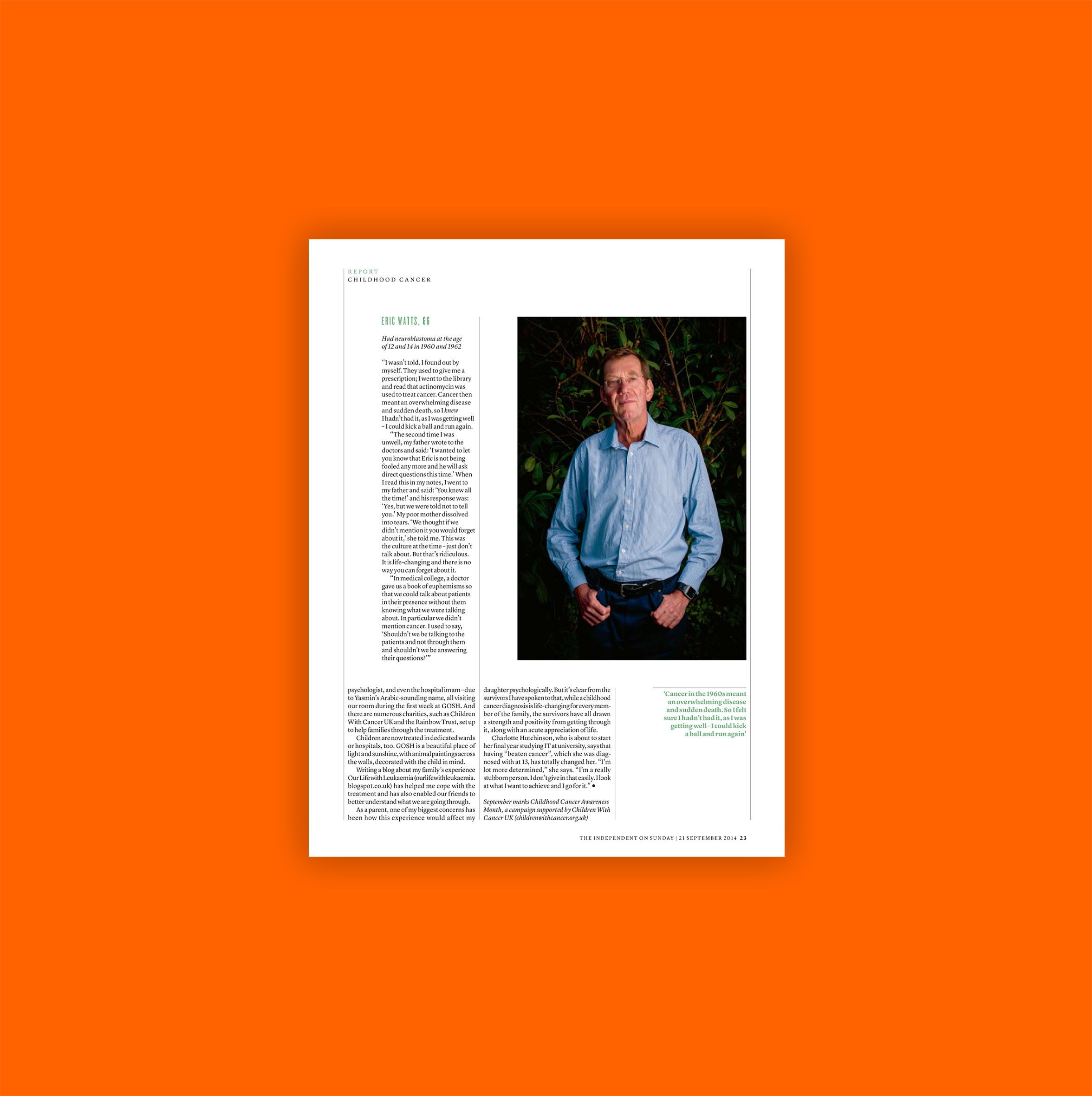 SURVIVING CANCER: They were expected to die – yet these childhood-cancer patients knew nothing of their diagnosis

SURVIVING CANCER: They were expected to die – yet these childhood-cancer patients knew nothing of their diagnosis

Once, child cancer patients were expected to die. Now, four out of five survive. As her daughter fights leukaemia, Karen Attwood meets those who survived a death sentence

Imagine being a child taken into a radiotherapy room and left alone under a large machine without a word of explanation. The machine starts “whirring and buzzing and sounding as though it is about to explode”; the same terrifying experience is then repeated daily for six weeks.

This is what happened to Eric Watts, who not only survived cancer twice, in 1960 and 1962 at the ages of 12 and 14, but was unaware that this was what he was being treated for. “It was the most dreadful tissue of bare-faced lies,” says Watts. Survival rates for his form of cancer, neuroblastoma, were then around 6 per cent, which means his parents were told he’d probably die.

In accordance with the paternalistic hospital culture of the day, parents were advised not to tell their children about their cancer diagnosis, yet Watts knew the consultants were “not being straight” with him. “I didn’t realise how serious things were, but I was in such bad pain at the time that there was a sort of unwritten agreement that I would go along with it for now because I wanted to be rid of the pain. As I improved over the next few weeks, I would say, ‘Hey what is wrong?’ and they would say, ‘Trouble with your back’ or ‘Just be quiet, we are making you better.'”

When Watts was 14, shadows were discovered on his lung – the cancer had returned. “My father had previously been treated for TB so they told me I had that,” he says. “But then I had more radiotherapy and actinomycin injections, so I realised then I wasn’t being treated for TB. I realised that I had been lied to, but I was k getting better so it didn’t terrify me,” he recalls. “But it did make me angry and mystified. I could clearly tell that what they were saying to me wasn’t correct.”

He finally found out when, as a 19-year-old medical student, he was having a routine check-up in the radiology department, and managed to read his notes on the table. As a result of his experience, Watts went on to become a doctor – he is now a haematology consultant – and to campaign for better communication with patients.

Lynne Thompson, now 50, had a similar experience. In 1971, at the age of seven, she underwent radiotherapy to treat Ewing’s sarcoma. But she did not find out that she had had cancer as a child until she was in her late twenties. Her prognosis had been similar to Watts’.

Thompson can recall the kindness of the nurses and the sense she had while undergoing treatment that she was on a big adventure – a testament to the strength of her parents in hiding their distress. She was told she was being treated for cysts, but as she got older, she began to question this. She finally asked her family GP about her illness and he confirmed the truth, saying: “I have wondered for years if you would ever ask me this.”

Thompson had many unanswered questions, yet it was a number of years before she finally felt she could tell her mother that she knew. Even now, she is reluctant to share that conversation as it is so painful for her family, though she does reveal that her mother recalls the consultant coming to the house with the diagnosis: “She is a really lovely little girl, I am sorry,” he told her. “Do you have any more children?”

My own daughter, Yasmin, four, is being treated for acute lymphoblastic leukaemia at Great Ormond Street Children’s Hospital (GOSH). She was only two when she was diagnosed and she will finish her horrendously long treatment next month. A child her age can’t understand the significance of cancer, but the culture in hospitals has changed so much – from the outset she has been informed about her condition in age-appropriate ways.

Yasmin particularly enjoyed a book given out at the hospital called Joe Has Leukaemia which talked about Joe’s “naughty blood cells”. The story helped her see that she wasn’t alone and, because he gets better at the end, it was reassuring for her to know that all the pain she was going through would end at some point.

The most important change from the 1960s to the present day is that survival rates have improved significantly. Fifty years ago, three-quarters of children diagnosed with cancer died; today, the average five-year survival rate across all childhood cancer types is 82 per cent, according to the charity Children with Cancer UK.

Childhood cancer remains rare – around 1,600 new cases are diagnosed every year in the UK, which means one child in 500 will develop it in some form. But it is still the most common cause of death in children aged one to 14. Brain tumours – research into which has been relatively underfunded – account for the largest number of childhood-cancer deaths and the treatments can lead to serious side effects because of the impact of radiotherapy on the developing brain. It is such side effects that Ashya King’s parents said they wished to avoid by taking their son out of Southampton hospital and to Prague for proton therapy treatment.

Acute lymphoblastic leukaemia patients do not need radiotherapy, but instead have two years of chemotherapy and steroids. The main side effects for Yasmin have been hair loss (twice), weight gain, grumpiness on steroids, and a lowered immune system, which at one point meant almost monthly emergency dashes to hospital for a course of life-saving antibiotics.

Families are also much better supported. We were enveloped in a blanket of care immediately following diagnosis and had a social worker, k psychologist, and even the hospital imam – due to Yasmin’s Arabic-sounding name, all visiting our room during the first week at GOSH. And there are numerous charities, such as Children With Cancer UK and the Rainbow Trust, set up to help families through the treatment.

Children are now treated in dedicated wards or hospitals, too. GOSH is a beautiful place of light and sunshine, with animal paintings across the walls, decorated with the child in mind.

Writing a blog about my family’s experience Our Life with Leukaemia (ourlifewithleukaemia.blogspot.co.uk) has helped me cope with the treatment and has also enabled our friends to better understand what we are going through.

As a parent, one of my biggest concerns has been how this experience would affect my daughter psychologically. But it’s clear from the survivors I have spoken to that, while a childhood cancer diagnosis is life-changing for every member of the family, the survivors have all drawn a strength and positivity from getting through it, along with an acute appreciation of life.

Charlotte Hutchinson, who is about to start her final year studying IT at university, says that having “beaten cancer”, which she was diagnosed with at 13, has totally changed her. “I’m lot more determined,” she says. “I’m a really stubborn person. I don’t give in that easily. I look at what I want to achieve and I go for it.”

Diagnosed in 1981 at the age of 13 with three simultaneous cancers: leukaemia, lymphoma and Hodgkin’s Disease

“My mother took me to the GP about six times but was told it was just a cold. She didn’t accept that and took me to a specialist. He looked down my throat; I was sent out to the car and didn’t know anything else from that moment on until years later. I was found to have three cancers and my parents were told there was virtually nothing they could do for me.

“As I got older, I started to reflect on my radiotherapy and chemotherapy treatment and around 17, I remember saying to my mother that I suspected I’d had cancer. I’d been reading about Bob Champion, the jump-jockey who had testicular cancer, and I’d been very agitated for a few days before plucking up the courage to broach the subject. She told me that my consultant, Dr Ken Lloyd, had advised my parents to ‘not tell Duncan any lies but don’t offer him any information’. When I found out, it did freak me out and I was worried about lumps and bumps.

“I have remained friends with Dr Lloyd all my life; he recently told me: ‘We had no idea what we were going to do with you. We just filled you full of everything we could and hoped for the best.’”

Diagnosed with acute lymphoblastic leukaemia in 2006, at the age of 13

“I’m really sporty and I was at football training, but couldn’t keep up. I was getting more run-down and getting nose bleeds, so my mum sent me to the doctor. He sent me for a blood test the next day and that evening I was called into hospital. The doctor came in and called my parents out. They were gone for ages and I knew something wasn’t right.

“The doctor sat me down and told me. I didn’t cry at all but everyone else did. I was more in shock, I suppose. I guess at 13 you understand it but also you don’t at the same time. I knew that death was a possibility, but I was determined not to let it happen.

“During two years of treatment, I didn’t take any days off school. I wanted to be a normal teenager.

“I got the all-clear in 2008 and then I was diagnosed with avascular necrosis, which is small fractures and dead bones in my legs, a painful side effect of the steroids I was on.

“I have been told I can’t make the condition any worse with sport, so I am doing the London Marathon this year with my sister for the charity Children with Cancer UK.”

“I wasn’t told. I found out by myself. They used to give me a prescription; I went to the library and read that actinomycin was used to treat cancer. Cancer then meant an overwhelming disease and sudden death, so I knew I hadn’t had it, as I was getting well – I could kick a ball and run again.

“The second time I was unwell, my father wrote to the doctors and said: ‘I wanted to let you know that Eric is not being fooled any more and he will ask direct questions this time.’ When I read this in my notes, I went to my father and said: ‘You knew all the time!’ and his response was: ‘Yes, but we were told not to tell you.’ My poor mother dissolved into tears. ‘We thought if we didn’t mention it you would forget about it,’ she told me. This was the culture at the time – just don’t talk about. But that’s ridiculous. It is life-changing and there is no way you can forget about it.

“In medical college, a doctor gave us a book of euphemisms so that we could talk about patients in their presence without them knowing what we were talking about. In particular we didn’t mention cancer. I used to say, ‘Shouldn’t we be talking to the patients and not through them and shouldn’t we be answering their questions?’”