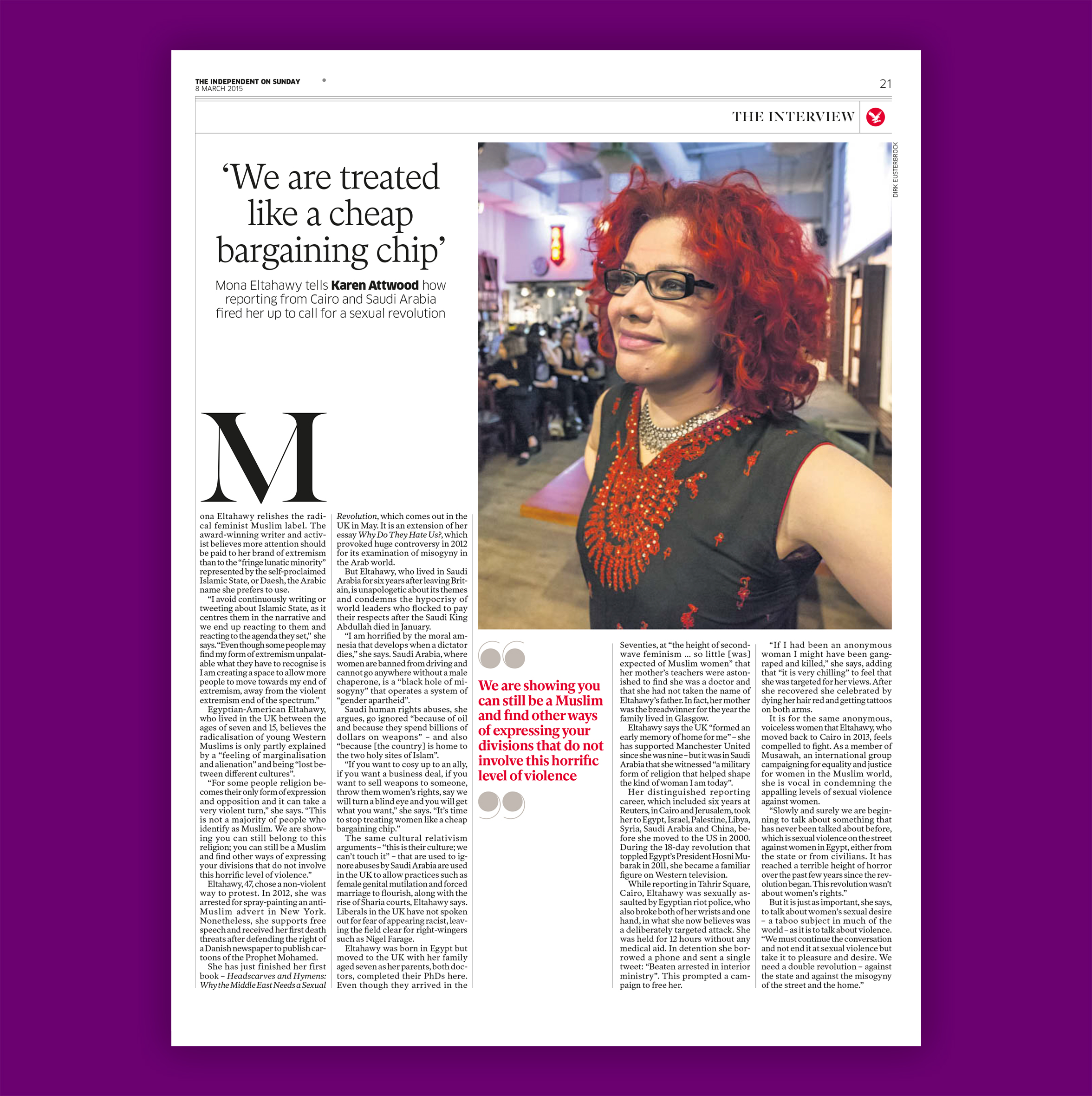 Mona Eltahawy relishes the radical feminist Muslim label. The award-winning writer and activist believes more attention should be paid to her brand of extremism than to the “fringe lunatic minority” represented by the self-proclaimed Islamic State (Isis), or Daesh, the Arabic name she prefers to use.

“I avoid continuously writing or tweeting about Isis, as it centres them in the narrative and we end up reacting to them and reacting to the agenda they set,” she says. “Even though some people may find my form of extremism unpalatable what they have to recognise is I am creating a space to allow more people to move towards my end of extremism, away from the violent extremism end of the spectrum.”

Egyptian-American Eltahawy, who lived in the UK between the ages of seven and 15, believes the radicalisation of young Western Muslims is only partly explained by a “feeling of marginalisation and alienation” and being “lost between different cultures”.

“For some people religion becomes their only form of expression and opposition and it can take a very violent turn,” she says. “This is not a majority of people who identify as Muslim. We are showing you can still belong to this religion; you can still be a Muslim and find other ways of expressing your divisions that do not involve this horrific level of violence.”

Eltahawy, 47, chose a non-violent way to protest. In 2012, she was arrested for spray-painting an anti-Muslim advert in New York. Nonetheless, she supports free speech and received her first death threats after defending the right of a Danish newspaper to publish cartoons of the Prophet Mohamed.

She has just finished her first book – Headscarves and Hymens: Why the Middle East Needs a Sexual Revolution, which comes out in the UK in May. It is an extension of her essay Why Do They Hate Us?, which provoked huge controversy in 2012 for its examination of misogyny in the Arab world.

But Eltahawy, who lived in Saudi Arabia for six years after leaving Britain, is unapologetic about its themes and condemns the hypocrisy of world leaders who flocked to pay their respects after the Saudi King Abdullah died in January.

“I am horrified by the moral amnesia that develops when a dictator dies,” she says. Saudi Arabia, where women are banned from driving and cannot go anywhere without a male chaperone, is a “black hole of misogyny” that operates a system of “gender apartheid”.

Saudi human rights abuses, she argues, go ignored “because of oil and because they spend billions of dollars on weapons” – and also “because [the country] is home to the two holy sites of Islam”.

“If you want to cosy up to an ally, if you want a business deal, if you want to sell weapons to someone, throw them women’s rights, say we will turn a blind eye and you will get what you want,” she says. “It’s time to stop treating women like a cheap bargaining chip.”

The same cultural relativism arguments – “this is their culture; we can’t touch it” – that are used to ignore abuses by Saudi Arabia are used in the UK to allow practices such as female genital mutilation and forced marriage to flourish, along with the rise of Sharia courts, Eltahawy says. Liberals in the UK have not spoken out for fear of appearing racist, leaving the field clear for right-wingers such as Nigel Farage.

Eltahawy was born in Egypt but moved to the UK with her family aged seven as her parents, both doctors, completed their PhDs here. Even though they arrived in the Seventies, at “the height of second- wave feminism… so little [was] expected of Muslim women” that her mother’s teachers were astonished to find she was a doctor and that she had not taken the name of Eltahawy’s father. In fact, her mother was the breadwinner for the year the family lived in Glasgow.

Eltahawy says the UK “formed an early memory of home for me” – she has supported Manchester United since she was nine – but it was in Saudi Arabia that she witnessed “a military form of religion that helped shape the kind of woman I am today”.

Her distinguished reporting career, which included six years at Reuters, in Cairo and Jerusalem, took her to Egypt, Israel, Palestine, Libya, Syria, Saudi Arabia and China, before she moved to the US in 2000. During the 18-day revolution that toppled Egypt’s President Hosni Mubarak in 2011, she became a familiar figure on Western television.

While reporting in Tahrir Square, Cairo, Eltahawy was sexually assaulted by Egyptian riot police, who also broke both of her wrists and one hand, in what she now believes was a deliberately targeted attack. She was held for 12 hours without any medical aid. In detention she borrowed a phone and sent a single tweet: “Beaten arrested in interior ministry”. This prompted a campaign to free her.

“If I had been an anonymous woman I might have been gang-raped and killed,” she says, adding that “it is very chilling” to feel that she was targeted for her views. After she recovered she celebrated by dyeing her hair red and getting tattoos on both arms.

It is for the same anonymous, voiceless women that Eltahawy, who moved back to Cairo in 2013, feels compelled to fight. As a member of Musawah, an international group campaigning for equality and justice for women in the Muslim world, she is vocal in condemning the appalling levels of sexual violence against women.

“Slowly and surely we are beginning to talk about something that has never been talked about before, which is sexual violence on the street against women in Egypt, either from the state or from civilians. It has reached a terrible height of horror over the past few years since the revolution began. This revolution wasn’t about women’s rights.”

But it is just as important, she says, to talk about women’s sexual desire – a taboo subject in much of the world – as it is to talk about violence. “We must continue the conversation and not end it at sexual violence but take it to pleasure and desire. We need a double revolution – against the state and against the misogyny of the street and the home.”